Written by Julia S.
Updated over a week ago

When times are imported from an electronic timer and at least one lane has 0.3 second difference or more between the pad and button times, that lane is highlighted in red. When that is the case, swimming rules (whether FINA, USA Swimming or NCAA) require you to review the differences and select whether to use the pad, button or watch time as the official time.

If you have the Show Backups if Time Flagged box checked, a window will automatically open with these differences. 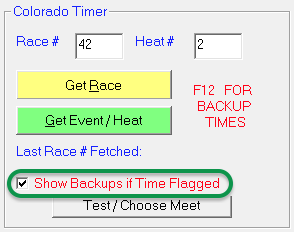 Otherwise, place the cursor on any time in that heat and click Edit Time Adjustments (F12) or press F12. An ADJUSTMENTS window will open that lists all the times and differences for this heat. (Note screenshot is a composite to show various possibilities; you will normally see less columns.)

After the meet you can generate a Modified Results report to see all times that were modified from their original pad times. On the main screen click Meet Reports, select Modified Results on the left, and then click Print/Preview. Note that this report will show EVERY time that was modified, even those with less than a 0.3 second difference.

The Original column will be blank if there is no pad time, or if someone modified a time and the pad/backup times difference is less than 0.3 second. Otherwise there was a 0.3 second violation and you will see one of these possible values indicating what was done with it.

See these links for additional reference.

Did this answer your question?